NYLaughs is a performing arts 501(c)3 that seeks to enrich lives, build community, inspire audiences and connect New Yorkers through humor. We strive to provide laughter free to New Yorkers on a consistent basis by producing comedy shows and events throughout the City’s public venues – from its parks and piers to its streets and subways to deepen an appreciation of comedy as a cultural asset unique to this city and to foster a happier, healthier NYC!

WHY WOULD YOU WANT TO DO THAT?
We feel unexpected laughter in public spaces can be a mighty thing. Because when we laugh together we forget about our problems, forget about our differences and just laugh until we cry. Sometimes everyone sings Kumbaya after the shows. It’s true…. Well maybe not so true.

When you attend a show, you’ll see New Yorkers of every race, socioeconomic level, gender and age all in one place laughing. Drifters and doctors; straight and gay; male, female, black and white are at our shows. Families and lots of singles, too. And being single ourselves we especially like that strangers come up to hug and thank us for the experience. 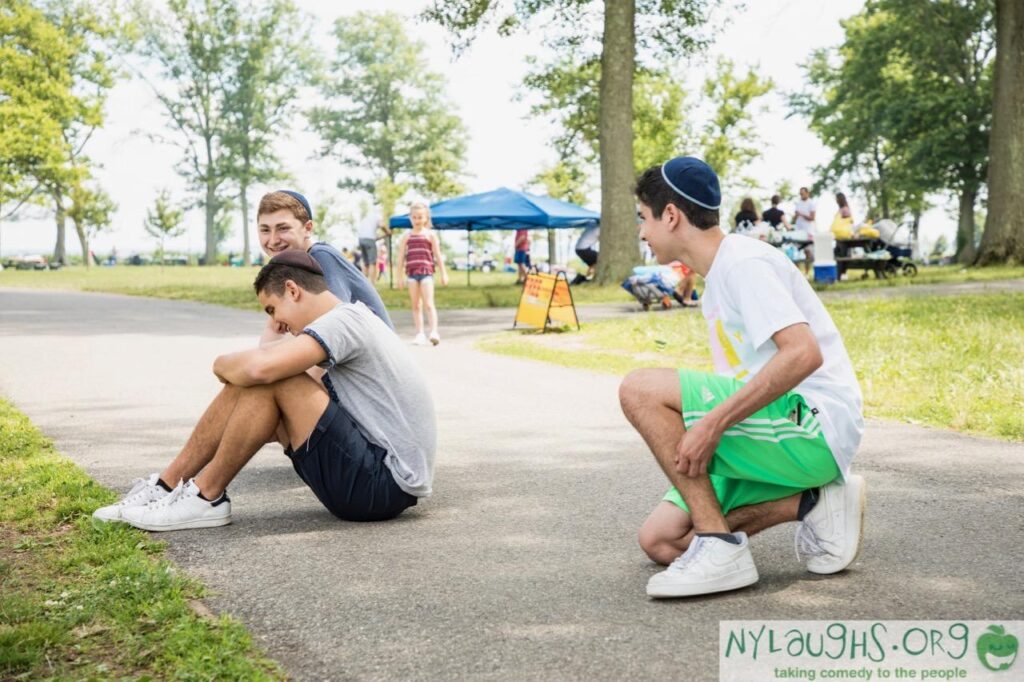 COOL! HOW DO YOU MAKE PEOPLE LAUGH?
We tell jokes.

COULD YOU BE MORE SPECIFIC?
We arrange for very funny people to hold a microphone and tell jokes. Most of our performers have headlined at comedy clubs, appeared on TV and/or written for network shows, but we also like to nurture new talent. So there are always some less-seasoned (but also funny) comics thrown into the mix.

WHAT IS LAUGHTER IN THE PARK?
Laughter in the Park is our signature event.  It’s a free comedy series where we can all hang out in the parks together and laugh.. It’s a free summer comedy series. We opted to name it Laughter in the Park because the shows are in the parks of NYC. We are creative and crazy like that. If we did shows on street corners, for example, we might name that series, Laughter on Corners. The founder actually started her comedy career performing in the subways of NYC – she’s called the Subwaycomic – but moved the show to the parks because picnics sucked in the subway. We’ve produced over 80 free shows in 15 parks / greenspaces since we began in 2007.

BUT HOW CAN SHOWS BE FREE? Well, it’s not easy, since shows require equipment, park permits, marketing materials, etc. so we rely on the generosity of others to help us.

NYLaughs is a 501(c)3 charity. That means, people can give us tax deductible money for our art. And money is one thing we don’t joke about. If you give us money, we won’t laugh. We might cry, hug you and never let you go – especially if you’re single.

We are also able to receive grants and other public funding because clever people – including our parks department, city officials, corporations and foundations – recognize that it’s important for people to have fun sometimes.  Maybe it’s their way of making up for all those parking tickets and extra taxes 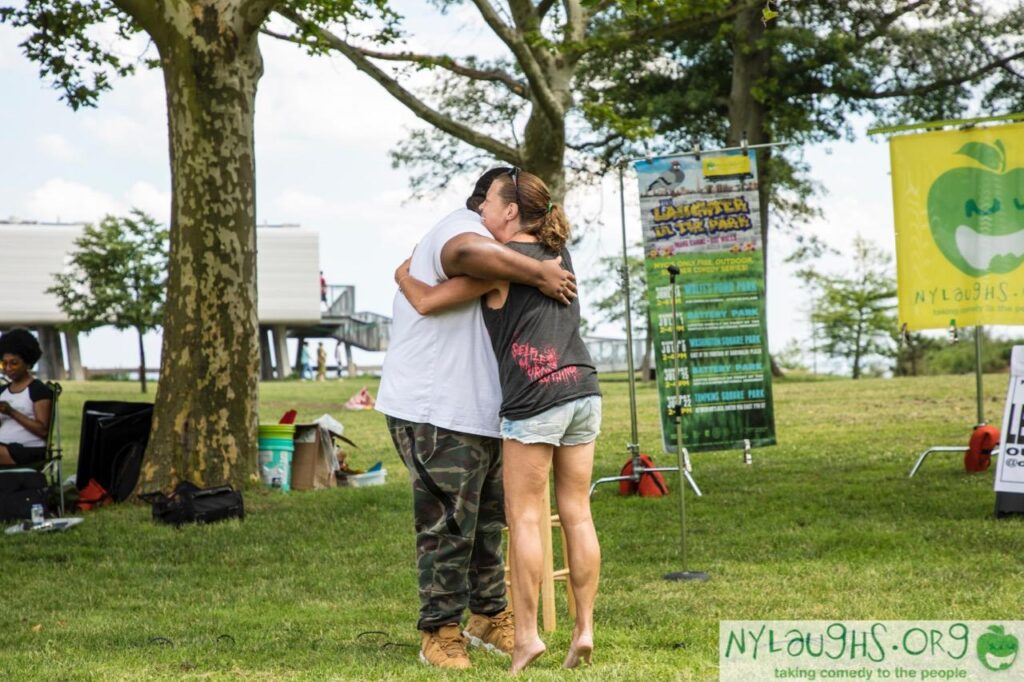 WOW! THAT SOUNDS GREAT! IS THIS THE FIRST SEASON?
No. We’ve had several years of Laughter in the Park. We began in 2007. Each summer since, the series has gotten bigger, better and funnier. More people laugh every year.

WHY STAND-UP COMEDY?
With so many challenges and negativity surrounding us these days, we opt for bringing joy and happiness to people’s days. It turns out that laughing is great for your health. It’s fun, brings New Yorkers together, helps the comically deprived and thanks to NYLaughs and Laughter in the Park…outdoor comedy is free every summer!

Sign up! We want to see you laughing now.

Sometimes it’s hard to explain who we are because we’re unique…we’re a bonafide 501(c)3 arts organization looking to expand the realm of live performance comedy by bringing it directly to the people to make a happier NY. Everyone deserves to laugh and everyone deserves access to the art form. In addition to introducing live stand-up comedy to many in attendance at our shows, our audience includes a whole set of people who don’t go to comedy clubs for a variety of reasons. We have people in recovery who aren’t comfortable in venues where there is a lot of drinking. We have seniors who don’t like to go out at night. We have people who can’t afford cover charges and drink minimums. We’ve have kids. Many comics have brought their children because they have never seen their parents on stage before. One comedian even performed with his child strapped to his chest. It’s a lot of fun, but running a funny non profit is no laughing matter – just ask the IRS. No one can make them even crack a smile.

Our ultimate goal is to change people’s perception of the comic arts, especially stand-up comedy, and to strengthen the shared cultural bonds that humor engenders. We’re working to grow into an umbrella organization for creative performers and organizations involved in comedy within the public realm so that NYLaughs can focus attention on new and exciting movements within the community. Through our featured events and series we can also channel corporate support to grassroots development in a way that has previously been lacking. We believe that laughter can change the world and we’re working to make it a part of the daily urban experience.